The Society is managed by a professional office staff, but the vision and goals of the organization are directed by its Board of Directors, various committees and task forces. 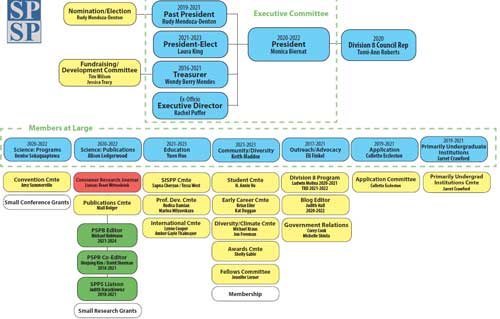 To see the current members and contact info for each committee, please visit the Leadership page.

SPSP is committed to making clear the value of work focused on the application of social and personality psychology and ensuring that SPSP is more inclusive of individuals doing that work. The Applied committee works to help SPSP achieve this goal. The committee will work on any number of activities related to this goal, such as: working with the program committee to create opportunities to showcase applied work at the annual convention; educating current members about careers that involve application of social and personality psychology; generating ideas for fostering collaboration between those doing basic and applied work.

Serving on the Applied Psychology Committee is a two-year commitment. Commitment to serving on this committee includes participating in monthly online meetings, work within subcommittees, regular email communication, and attendance and meeting at the annual convention.

The SPSP Awards Committee appoints, oversees and works closely with the Award Nomination Panels, who nominate and select SPSP award recipients using various processes, criteria, and the spirit of the award. The Awards Committee also works to continuously improve and expand SPSP's awards program. Finally, the Awards Committee selects the annual "Service to the Field" and “Service to SPSP” awards. Members are tasked with identifying individuals to serve on the Award Panels, overseeing the panels and sanctioning the selections, and identifying ways to improve and expand the awards program. Members of the committee are also asked to review nominations and select the recipients of the two Service awards.

Serving on the awards committee is a three-year commitment with less than 10 hours of work taking place throughout the year, most. During your third year of service, you must attend the Winter Board meeting of SPSP, as well (costs reimbursed). Most committee business is conducted via email, but with an occasional conference call. Committee members should be well-networked in order to staff the Awards Panels each year.

The Convention Committee organizes numerous aspects of SPSP's annual convention and preconferences. In addition to oversight of the convention and schedule, specific responsibilities include featured programming (e.g., Out of the Lab, Inside the Grant Panel) and the Legacy Award program.

Volunteers on the Convention Committee fall into one of the following categories:

Three-year committee members: These individuals make up the core of the committee and serve for thee years. Each year, a different task is assigned to individual. First year is oversight of the awards addresses, second year is oversight of the Legacy program, and third year is chair of the convention. Serving as a three-year committee member includes attending the Winter Board meeting during the second and third year of service (costs reimbursed). Previous experience with programming and/or convention management is preferred.

Two-year committee members: These individuals serve on the committee for two years. The first year is oversight of Inside the Grant Panel and the second year is Out of the Lab. After two years, this position rotates off and may apply for a three-year spot on the committee.

Program Committee Reviews: Two members are assigned to this task for two years each. The first year, the pair is responsible for programming all single presenter sessions (posters, data blitzes, and single paper sessions). The second year, the pair manages symposia selection and the two invited sessions. Attendance at the Winter Board meeting prior to the second year is required (costs reimbursed).

Eligibility: Committee members should have a broad and inclusive perspective on SPSP, its membership, and past SPSP conventions; availability throughout most of the calendar year but particularly over the summer and in the months leading up to the convention; ability and willingness to work with other committee members to troubleshoot convention-related issues and challenges; ideas about what makes the convention most successful and what might be improved from year to year, including from other society conventions. Committee members must maintain their SPSP membership throughout their tenure on the committee.

The Diversity and Climate Committee monitors diversity in the organization and funds efforts to support the conference attendance of students who come from underrepresented groups (e.g., ethnic or racial minority students; first-generation college students; lesbian, gay, or bisexual students; transgender students; and/or students with a physical disability), in an effort to increase the diversity of personality and social psychology. Committee members regularly review SPSP diversity initiatives, conduct the climate survey, advise SPSP board and staff on diversity issues, review and select diversity-related award recipients (including travel awards and SPUR), and plan diversity events at the SPSP convention. Responsibilities may include diversity initiatives outside of the convention. Incoming members should have some experience in coordinating diversity efforts in either academic or non-academic settings.

Eligibility: Committee members should have some experience in coordinating diversity efforts in either academic or non-academic settings. Preference is given for members who are in advanced stages of their career (i.e., not junior). Committee members must maintain their SPSP membership throughout their tenure on the committee.

The Program Chair solicits and develops innovative and interactive programs and sessions that are attractive to Convention attendees. Although a primary focus is to provide the opportunity for researchers to present cutting edge data, Program Chairs, in collaboration for their Division’s leadership, can initiate programs to address content or issues not addressed in proposals that they received. Further, Program Chairs can encourage Division members to develop and submit collaborative and innovative programs between the Divisions and APA Boards & Committees.

Eligibility: The incoming President-Elect appoints the individual to serve in the Year 1 position in the summer. Committee members must maintain their SPSP membership throughout their tenure as Program Chair.

Year 2: serve as Program Chair and liaison with SPSP Executive Director to fulfill your responsibilities, attend the APA Convention.

The Early Career Committee was formed in 2019 to help address the needs of SPSP’s early career members. The committee hopes to ensure that relevant resources, networking opportunities and programming are available to early career members and that their interests are represented across SPSP.

Volunteers are needed to both assist in reviewing applications AND serving on the Fellows Committee. Reviewing takes place each May/June. Serving on the fellows committee is a three-year commitment with less than 10 hours of work taking place throughout the year, most. During your third year of service, you will chair the committee. Most committee business is conducted via email and happens mostly in May/June.

The SPSP Fundraising and Development Committee works to raise funds to support SPSP’s core areas of activity. Specific projects include the Heritage Wall of Fame, annual giving campaign, and working with individual donors who are interested in supporting SPSP and the field of social/personality psychology.

Eligibility: Development committee members are selected based upon their willingness to support in the field, professional and personal connections, diversity or international status, and fundraising knowledge. Committee members must maintain their SPSP membership throughout their tenure on the committee.

The Government Relations Committee provides advice and support to the SPSP staff and Board of Directors on advocacy for social and personality psychology. The Committee contributes to the specification of strategies, priorities, and mechanisms that can best permit SPSP to promote the field by engaging members to support the goals of the committee. The primary focus of the Committee’s attention is on national policy and the federal system of research and development (R&D), whether in the legislative, executive, or judicial branches of government.

Eligibility: The panel members must have a PhD. Committee members must maintain their SPSP membership throughout their tenure on the committee.

The SPSP International Committee seeks to make SPSP and the field of social and personality psychology more geographically diverse, both in terms of researchers and the populations they study. The committee works to continuously improve the ways that SPSP’s conferences, publications, programs, and website can become more internationally diverse.

The Nominations and Elections Committee purpose is to increase transparency and facilitate the nominations process for the Board of Directors and Committees. The committee is charged with ensuring the nominations reflect the goals and values of the organization and to develop a strong leadership pipeline.

The committee consists of eight members. Serving on the committee is a one or two-year term. The term officially begins January 1. Pre-term work (approximately 1 hour) will be required to prepare for the elections call for nominations which launches in November.

The Primarily Undergraduate Institutions (PUI) Commitee is charged with enhancing the profile of members at PUIs, identifying roadblocks unique to PUIs members, and increasing support for PUI members.

Eligibility: Committee members should have experience teaching and working at PUIs. Evidence of prior service work, especially regarding PUI issues, is a plus. Committee members must maintain their SPSP membership throughout their tenure on the committee.

The purpose of the SPSP Professional Development Committee is to improve psychological science by supporting students, faculty, and professionals. We provide workshops, webinars, and professional development sessions. Training opportunities focus on innovative research methods, data analytic tools and best research practices. Development sessions provide resources that support advancement along career paths and trajectories within and outside of academia.

Committee members are expected to attend the annual convention each year (convention registration reimbursed) and participate in periodic phone meetings. Serving on the professional development committee is a three-year commitment. During your third year of service, you must attend the winter meeting of the SPSP Board of Directors (costs reimbursed). Time commitments to serve on this committee include roughly 20 hours over the summer reviewing proposals and periodic email communications supporting the development of online learning webinars.

Committee members are expected to attend the annual convention each year (convention registration reimbursed) and participate in periodic phone meetings. Serving on the publications committee is a three-year commitment. During your third year of service, you must also attend the winter meeting of the SPSP Board of Directors (costs reimbursed).

Eligibility: Committee members should have experience in the publishing process (e.g. editor, associate editor). Preference is given for members who are in advanced stages for their career (e.g. not junior). Committee members must maintain their SPSP membership throughout their tenure on the committee.

The Student Committee works to promote the interest of SPSP's student members. This includes producing helpful student content, organizing events for student members at the annual convention, and much more.

SPSP offers bi-annually (in odd-numbered years) a two-week, intensive summer experience for up to 100 pre-doctoral students in social and personality psychology. The SISPP committee works to select SISPP locations, candidates, faculty, and curates courses and workshops.

Committee members are expected to attend the annual convention each year (convention registration reimbursed) and participate in periodic email communications. Serving on the SISPP committee is a three-year commitment. Members of the committee review applications, select SISPP courses, recruit SISPP speakers, and participate in the updating/renewal of the NSF grant. During your third year of service, you will serve as chair and oversee either instructor selection (even-numbered years) or application review (odd-numbered years).

Join the more than 200 volunteers that help push forward the SPSP mission each year.

© 2022. Society for Personality and Social Psychology®. All rights reserved.